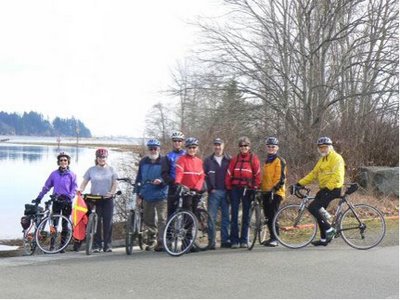 “Eight of our keen members showed up for the ride on February 21. The air was cool but the sun made riding very pleasant. The plan was to look at the Riverside trail to see what can be done to make it safer. After riding over 5th Street Bridge, we went under the bridge and up the set of stairs where bikes have to be carried. A smooth narrow strip of concrete on at least one side of the stairs would make it much easier to move bikes up or down these stairs.

The Riverside Trail is a pleasure to ride. At least for the first part after its start behind Central Builders.

The closer one gets to the Airpark the busier it gets with people walking, some with their dogs on loooong leashes.

This trail coming down a fairly steep hill from 17th Street Bridge meets the Riverside trail on a blind corner and needs a caution sign for cyclists to slow down.

The two steel posts in the middle of a sharp turn on the trail make it difficult for some cyclists, particularly with trailers to negotiate the turn. With the new landscaping in place they should no longer be necessary to keep cars off the trail. The concrete garbage container could be moved off the trail.

As mentioned earlier, once you get to the Airpark the traffic on the trail gets quite busy in the afternoon of a sunny day. There are many people walking with kids and dogs and kids riding their bikes and trikes. This is a great and true multi use trail and, in my opinion, cyclists should not expect to be able to ride on it at any speed.

There are a few corners that could be widened and a center line in some places might help to separate traffic going in different directions. Perhaps a few signs could explain who has the right-of-way and where people should walk or ride. But, in my opinion too many rules and regulations would spoil the trail.

This is the kind of trail where nobody should be in a hurry, everyone watch out for everyone and faster people yield to slower ones.

I would suggest that we leave this trail to pedestrians and only slow recreational riding and get one of the south-north running streets improved for faster cycling and commuting.

All of this is my personal opinion. Please let me know if yours is different. In the end we will leave it up to one of our committees to determine what the stand of our coalition on this trail is.

Wow, how can anyone say so little with so many words?